When I was in middle school I visited a friend’s house and his dad was an electrician and had wired their house to be solar powered. As we talked on the ivy covered back porch he explained that sometimes, when there wasn’t enough solar power, everything would shut down until someone flipped the switch back to commercial while the solar caught up.

Now that I own a giant heap of wood, nails, plaster and shingle (actually a decent 1920’s house) and pay electricity bills regularly (which seem to be increasing), I though I’d check out solar power again and see if it’s feasible.

The first thing I learned is that there are on-grid and off-grid systems. The on-grid systems tie the solar right to the power grid of the city and the city subtracts what one contributes from the total bill, but will not pay for any extra energy generated. However, I’ve read something that makes me think they may have re-started a program which pays watt-per-watt regardless of what is used. I’ll have to check this out with my local electric company (which is also my water & sewer company, by the way). Off-grid systems use banks of batteries which level out the fact that the house will need power even when the sun isn’t out.

Other than being on- or off- grid, solar systems also have a rating of the energy they can produce in terms of KWH, kilowatt-hours, and to know the right size system for a particular house, one must know the KWH usage for the house.  Here’s the electric consumption for this house since January 2013: 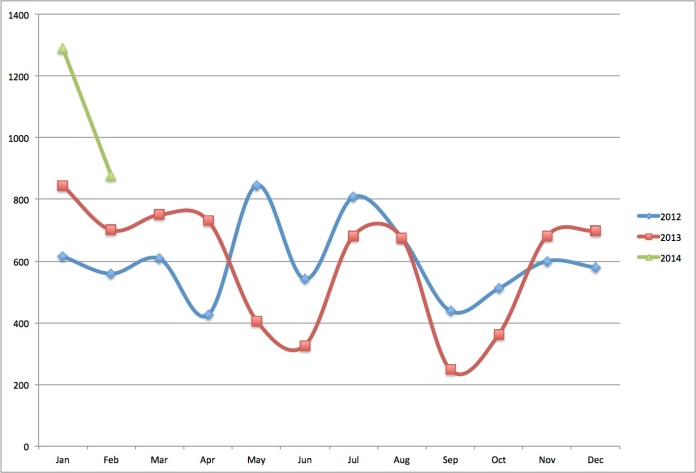 So what if I just bought a small 1KW on-grid kit and slowly expanded?  The on-grid 1KW kit from Renogy is $2179 and includes 4 panels and inverters, mounting hardware, trunk to connect to the grid and is eligible for the 30% federal tax rebate (knocking about $650 off) bringing the total to about $1525 after April rolls around.  But the snag is that, for an off-grid system, the inverter would need to be capable of expansion and I’m not sure if there’s any sort of hardware with a capacity need for expanding an on-grid system.  I’ve emailed Renogy so we’ll see 🙂

So I found this awesome site on using sand to filter rainwater and use in the garden/yard (and maybe even in the house if it tests out!